I had to do an illustration for the US election.
10 hours until the vote closes, and there's still something really bothering me... unless you're in denial or living under a rock, it's common knowledge that Trump and his supporters and racist. His immigration tactic stole the hearts of all the painfully stupid white Americans, and when asked about deportation (claims to deport 11m in 2 years) he said "those people are out. They're gonna be out so fast your head will spin". It fascinates me that Trump has chosen to demonise blacks and Latinos, for being illegal immigrants, yet his wife is from Yugaslavia. Melania went to the USA in 1996 and fully emigrated in 2001. She wasn't born in the USA, she doesn't "sound American" and it certainly took a few years to get her green card. So why are people from Slovakia, like Melania, not tarnished with the same "foreigner" brush like all the other victims of Trump's small orange mouth? It probably helps that she's white.
Before starting this illustration I did a little research of poor Melania. Why is she married to this animal and why is she an exception to his xenophobic rules?! Other than "bigly", Trump's favourite word is "crook" - something he likes to use not just to describe Clinton, but also a lot of the "hombres" in the USA. It turns out that his own wife is a not only an immigrant but also a crook! Melania's website falsely claimed for more than a decade that she had a degree in architecture and design from the University of Ljubljana. Her biography in the 2016 Republican National Convention official program also incorrectly stated that she had obtained a degree in Slovenia. She has lied about her education for her own financial and personal gain.

It deeply concerns me that half of the USA doesn't see the hypocrisy in everything Trump says. His wife is a liar who made false claims. His wife is not a US born citizen. Yet Trump expresses an immense hate for those exact people. This man spews nothing but hate and division, and simply cannot be in charge of the USA, otherwise the entire world will be under threat. I'm scared for tomorrow. 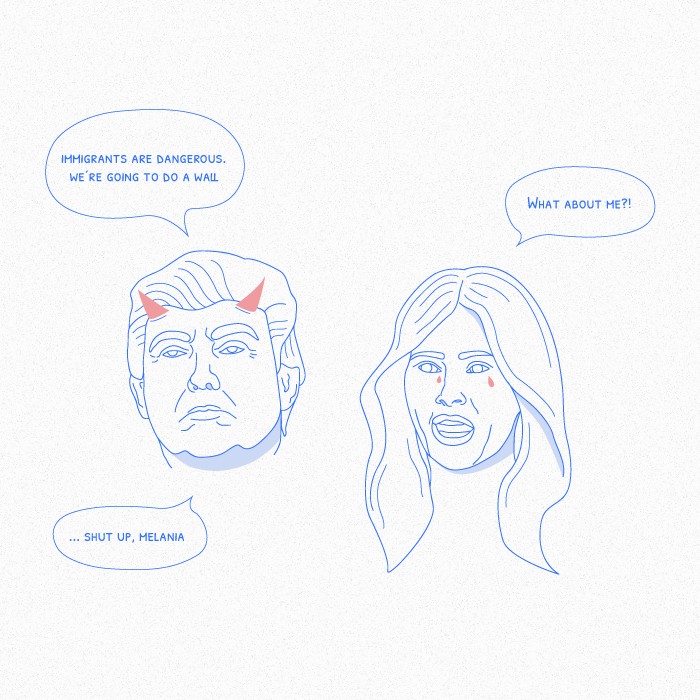